Feel free to use your devices to further research the documents.  ​
Document 1 - Solomon Northrup,  Twelve Years a Slave: Narrative of Solomon Northrup (Auburn, N.Y., 1853).
​
"THERE IS NO SUCH THING AS REST"

Solomon Northrup was a free black who was kidnapped in New York and sold into slavery for twelve years. He was finally returned to freedom through the efforts of New York's governor. In the following selection he describes how cotton was raised on his Louisiana plantation.

The hands are required to be in the cotton field as soon as it is light in the morning, and, with the exception of ten or fifteen minutes, which is given them at noon to swallow their allowance of cold bacon, they are not permitted to be a moment idle until it is too dark to see, and when the moon is full, they often times labor till the middle of the night. They do not dare to stop even at dinner time, nor return to the quarters, however late it be, until the order to halt is given by the driver.
The day's work over in the field, the baskets are "toted," or in other words, carried to the gin- house, where the cotton is weighed. No matter how fatigued and weary he may be- - no matter how much he longs for sleep and rest- - a slave never approaches the gin- house with his basket of cotton but with fear. If it falls short in weight- - if he has not performed the full task appointed him, he knows that he must suffer. And if he has exceeded it by ten or twenty pounds, in all probability his master will measure the next day's task accordingly. So, whether he has two little or too much, his approach to the gin- house is always with fear and trembling. Most frequently they have too little, and therefore it is they are are not anxious to leave the field. After weighing, follow the whippings; and then the baskets are carried to the cotton house, and their contents stored away like hay, all hands being sent in to tramp it down. If the cotton is not dry, instead of taking it to the gin- house at once, it is laid upon platforms, two feet high, and some three times as wide, covered with boards or plank, with narrow walks running between them.
This done, the labor of the day is not yet ended, by any means. Each one must then attend to his respective chores. One feeds the mules, another the swine- - another cuts the wood, and so forth; besides, the packing is all done by candle light. Finally, at a late hour, they reach the quarters, sleepy and overcome with the long day's toil. Then a fire must be kindled in the cabin, the corn ground in the small hand- mill, and supper, and dinner for the next day in the field, prepared. All that is allowed them is corn and bacon, which is given out at the corncrib and smoke- house every Sunday morning. Each one receives, as his weekly allowance, three and a half pounds of bacon, and corn enough to make a peck of meal. That is all- - no tea, coffee, sugar, and with the exception of a very scanty sprinkling now and then, no salt....
An hour before day light the horn is blown. Then the slaves arouse, prepare their breakfast, fill a gourd with water, in another deposit their dinner of cold bacon and corn cake, and hurry to the field again. It is an offense invariably followed by a flogging, to be found at the quarters after daybreak. Then the fears and labors of another day begin; and until its close there is no such thing as rest....
In the month of January, generally, the fourth and last picking is completed. Then commences the harvesting of corn....Ploughing, planting, picking cotton, gathering the corn, and pulling and burning stalks, occupies the whole of the four seasons of the year. Drawing and cutting wood, pressing cotton fattening and killing hogs are but incidental labors.
Document 2 - "Stange Fruit"  Sung by Billie Holiday .  Released 1939.   Lyrics start around minute 1:10.
Document 3- Olympic Games, Mexico City 1968.  Black Power. 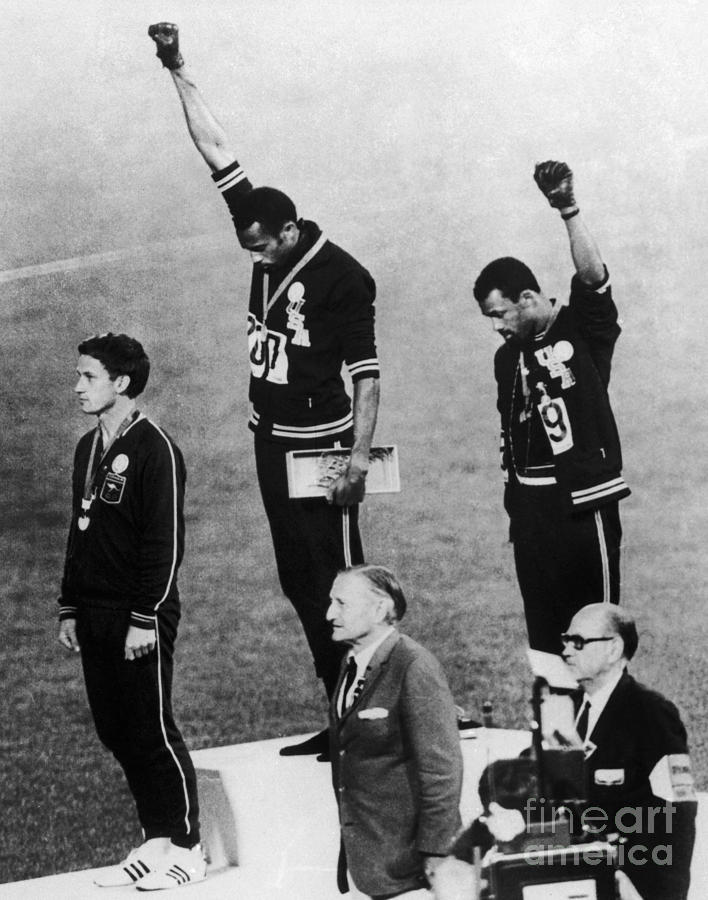 The documents that you choose- impacts the directions your students take.